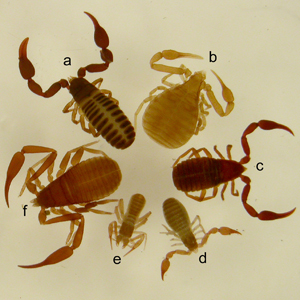 Photographic key to the Pseudoscorpions of Canada and the adjacent USA

Photographic key to the Pseudoscorpions of Canada and the adjacent USA

The pseudoscorpion fauna of northern North America is poorly known, in part because of the scarcity of taxonomic resources. This photographic key was developed by combining existing keys with photographs of diagnostic characters from about 80 specimens of pseudoscorpions from North America. The key will classify 35 taxa (to genera and some species) of pseudoscorpions occurring in Canada and the adjacent USA. Some distribution notes are presented, along with information about habitat affinities and general ecology.

For each taxon, specimens were either collected in the field, were sent to me over the last several years, or were borrowed from Museums (primarily the Canadian National Collection (CNC), Ottawa, and the Florida State Collection of Arthropods (FSCA)).  Whenever possible, I used and examined specimens from northern North America for photographs.  William Muchmore also provided many Canadian specimens, and I have relied heavily on many of his slide specimens currently housed at the FSCA.  The bulk of the specimens used were slide-mounted, although some characters were better displayed with alcohol specimens and/or only wet specimens were available for study.

Slide specimens were photographed using a Leica Infinity1 Camera housed on a Leica DM 2500 compound microscope.  For most specimens, 4-6 photographs at different depths of field were taken and subsequently stacked using Combine Zm software (available at http://hadleyweb.pwp.blueyonder.co.uk/CZM/News.htm). Wet specimens were photographed with either the Leica Infinity 1 Camera, or a Nikon Coolpix 4500 Camera, attached to a Nikon SMZ 1500 dissecting microscope. Images were then edited using Adobe Photoshop Elements (Version 4.0).

Over 150 specimens were examined, including all taxa currently represented in Canada.  About 80 of these were photographed for generalized anatomy and for diagnostic images for the taxonomic key. For some rarely encountered taxa known only from the adjacent USA, I was unable to obtain specimens to photograph and these couplets are not accompanied by images (e.g., Aspurochelifer littlefieldi).   The key was written by relying heavily on the works of Muchmore (1990), Hoff (1949), and the unpublished manuscripts by M.J. Sharkey. Distributions and ecological information is taken from Muchmore (1990), Harvey (1990, 2009), unpublished reports by M.J. Skarkey, and my personal collections and experience. Unfortunately, some taxa remain unresolved and I have taken a conservative approach when necessary.  I have adopted nomenclature proposed by Harvey (2009), unless indicated otherwise, and the key is for a total of 35 taxa (Table 1). 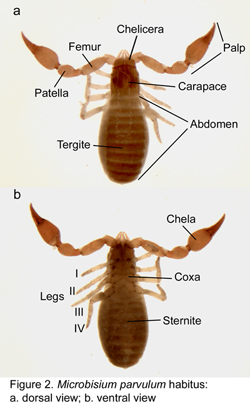 The pseudoscorpion body is divided into an anterior cephalothorax (or prosoma) (dorsally, the carapace) and a posterior abdomen (or opisthoma), broadly connected to each other (Figure 2).   Males can be differentiated from females, but sexual determination can be difficult. The genital openings occur between the second and third opisthosomal sternites. In general the genital area of females is lightly sclerotized and appears as a bright zone behind the coxae of the legs (Figure 3).  In males, this region is relatively dark and more highly sclerotized (Figure 3).  Males are also typically smaller than females.  Some species also exhibit sexual differentiation in the palps.

The chelicerae contain important taxonomic characters (Figures 2, 4):  they are two-segmented structures used to grasp and macerate prey items, and include a fixed and movable finger (Figure 4). Each of the chelicera bears a variety of setae, the placement of which are important for taxonomic purposes.  The rallum is a tight grouping on the medial side (Figure 4); the setae of the lateral side are named as follows: exterior seta (es), basal seta (bs), subbasal seta (sbs), interior seta (is), laminal seta (ls), and galeal seta (gs) on the movable finger. A comblike or membraneous serrula occurs along the side of the movable finger, with the spinneret or galea at the end, which carries the openings of the silk glands.

The third pair of appendages is the pair of long palps or pedipalps, with the coxae of these serving as accessory mouthparts (Figure 2). Beyond the coxa, each palp is comprised of the trochanter, femur, patella, and chela, with a fixed and movable finger.  The chela is used for defense and prey capture.  The palpal chela usually has numerous teeth along the inner margins, ending with a sharp tip (venedens), which has an opening for the venom gland.The sensory setae (trichobothria) on the movable finger are named as follows (Figure 5), divided by a lateral or exterior series and a medial or interior series: basal (b), subbasal (sb), subterminal (st) and terminal (t).  The setae for the fixed finger are named as follows: exterior basal (eb), exterior subbasal (esb), exterior subterminal (est), exterior terminal (et), interior basal (ib), interior subbasal (isb), interior subterminal (ist), and interior terminal (it).

The remaining four pairs of appendages are walking legs (Figure 2), consisting of a

coxa, trochanter, basifemur, telofemur, tibia, and one or two tarsal segments.  The legs terminate with two claws and an arolium.  The abdomen is divided into 11 or 12 segments, with sclerotized tergites dorsally and sternites ventrally (Figure 2), separated by soft, flexible intersegmental and pleural membranes.  The spiracles are found at the lateral edges of the third and fourth sternites.

How to use this key
This dichotomous key is designed for use with both wet specimens and mounted on slides.  For most general collections of pseudoscorpions, specimens are typically preserved in 70-95% ethanol; typically slide mounts are done only for long-term storage of voucher specimens.  When working with wet specimens, it is advised to handle the specimens with small insect pins or fine forceps.  For using the key accurately, legs I and IV should be removed (including trochanter but not the coxa), and one chelicera and one chela are typically removed. These are placed separately from the whole specimens on a flat slide with a cover slip propped up with a small piece of fishing line; some structures may need to be cleared for a period of 1-3 days or more (i.e., if heavily sclerotized) with a clearing agent (e.g., lactic acid) if required.  It is possible to gently rotate the structure under the cover slip by gently moving the cover slip and, provided the fishing line is thin enough, the structure will rotate with ease.  In this manner, the correct orientation is achieved. The whole specimen can be viewed by placing in a depression slide with ethanol.

Table 1.  Summary of pseudoscorpion taxa that can be determined using the key. Nomenclature follows Harvey (2009).

Thanks to William Muchmore, GB Edwards (Florida State Collection of Arthropods), Michael Sharkey, Mark Harvey, Terry Wheeler and the Lyman Entomological Museum (McGill University), and the Arachnological Community of Canada for specimens, enthusiasm and moral support.  Funding was provided in part from a Discovery Grant (National Science and Engineering Research Council of Canada).

Buddle, C.M.  2005. A primer on pseudoscorpions and taxonomic status in Canada. Newsletter of the Biological Survey of Canada (Terrestrial Arthropods) 24: 12-16.