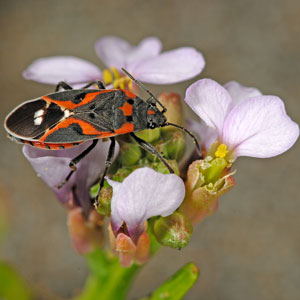 Seed Bugs and their allies (Hemiptera: Heteroptera: Lygaeoidea) of the Canadian Prairie Provinces

Seed Bugs and their allies (Hemiptera: Heteroptera: Lygaeoidea) of the Canadian Prairie Provinces

The Hemiptera superfamily Lygaeoidea is represented in the Canadian Prairie Provinces of Alberta, Saskatchewan and Manitoba by 76 species distributed among 10 families, namely: Artheneidae (1 species), Berytidae (2), Blissidae (3), Cymidae (4), Geocoridae (7 described plus 1 undescribed species), Lygaeidae (18) (Ischnorhynchinae (2), Lygaeinae (7), Orsillinae (9)), Oxycarenidae (3), Pachygronthidae (1), Piesmatidae (4) and Rhyparochromidae (31). Keys to families and species are presented and for each species we provide notes on distribution, recognition and ecology as well as a photograph of the dorsal habitus. The general ecology of lygaeoid bugs with special reference to those of the Canadian Prairies is discussed.

Within the region, known lygaeoid fauna is most diverse in the Cypress Hills and adjacent dry prairie regions of southeastern Alberta and southwestern Saskatchewan. There the dominant transcontinental faunal element is enriched by western, eastern and southern species reaching their distribution limits. Few introduced species are present, and these are largely synanthropic or ecological specialists and appear to have had little effect on the native fauna. Humans, through disrupting natural ecosystems, generally enhance lygaeoid bug faunas for most species favour disturbed or early successional stage environments. However, modern prairie agriculture has probably greatly impacted the fauna by fragmenting and reducing habitat through the wide extent of cultivation, use of chemicals and intensive grazing. Most species of Lygaeoidea appear to be resilient to these impacts due to their rather general ecological requirements and there is no evidence that any species has been lost from the fauna although some are in surprisingly low densities or have small, very widely distributed populations.

This publication is available as an EPUB 3 eBook in addition to the standard PDF. EPUB eBooks can be read on most devices and eReaders, with the exception of Amazon Kindle.