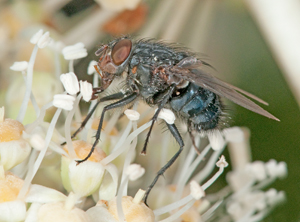 The North American subfamilies and eastern North American genera of Calliphoridae, as well as the 21 species of blow flies (other than species of the parasitic genus Protocalliphora) now known from, or likely to occur in, eastern Canada, are keyed. Calliphora loewi and Lucilia coeruleiviridis are formally recorded from Canada or eastern Canada for the first time. Distribution maps, derived from the University of Guelph Insect Collection database, are provided for each species.

The North American species in the family Calliphoridae (blow flies, cluster flies and their relatives) are divided into five subfamilies, including Calliphorinae, Luciliinae and Chrysomyinae (blow flies; frequently common, metallic that usually develop on living or dead vertebrate tissue), Polleniinae (cluster flies; frequently common, dull-colored parasitoids of earthworms) and Melanomyinae (rarely encountered, dull-colored parasites of mollusks). The blow fly subfamilies (Calliphorinae, Luciliinae and Chrysomyinae) are of particular interest because of their importance in medical and forensic entomology and because of their importance as common pollinators of a wide variety of plants. All three blow fly subfamilies include extremely common and frequently encountered synanthropic species in eastern Canada, so correct identifications of species in these groups are often required by forensic entomologists, ecologists, medical entomologists and others. Whitworth’s (2006) technical keys to the genera and species of Calliphoridae of America north of Mexico allow identification of most Nearctic species, but leave room for the development of simplified, more richly illustrated regional keys that will facilitate rapid and accurate identification of these important flies. We here provide a key to the North American subfamilies and eastern North American genera of Calliphoridae and a new photographic key to the 21 species of blow flies (other than species of the parasitic genus Protocalliphora) known from, or likely to occur in, eastern Canada. Some species, including Calliphora loewi and Lucilia coeruleiviridis, are formally recorded from Canada or eastern Canada for the first time; one other species (Chrysomya rufifacies) was first recorded from Canada subsequent to Whitworth’s 2006 key. The associated database is restricted to specimens housed in the University of Guelph Insect Collection and the maps reflect only specimens in that database.

Checklist of genera and species

keys to the genera of Polleniinae of Luciliinae (all Lucilia)

Whitworth, T. 2006. Keys to the genera and species of blow flies (Diptera: Calliphoridae) of America North of Mexico. Proceedings of the Entomological Society of Washington 108 (3): 689-725.

We would like to thank Morgan Jackson for preparing the maps, Steven Paiero and Adam Jewiss-Gaines for assembling the database, Mehrdad Parchami-Araghi for his major contributions to the curation of the University of Guelph Calliphoridae collection, Stephen Luk for help with specimen imaging, and Dave Cheung for help both with specimen imaging and formatting the key.