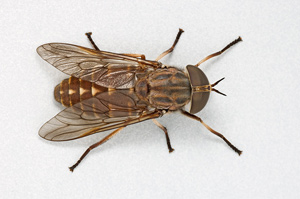 Interactive keys are provided for the 3 subfamilies of Tabanidae in Canada east of the Rocky Mountains. Keys are also provided for the 4 genera and 80 species (known and expected) of the subfamily Tabaninae in this region: 2 species of Haematopota Meigen, 40 species of Hybomitra Enderlain, 12 species of Atylotus Osten Sacken, 24 (plus two expected) species of Tabanus Linnaeus. Distribution maps for all species are provided, incorporating additional records since the most recently published maps (Teskey 1990).

Tabanus novaescotiae Photo by A. Thomas

The present contribution is an illustrated key to the Canadian Tabaninae east of the Rocky Mountains and is the final part for the eastern Canadian species of Tabanidae following the initial article (Thomas & Marshall 2009) on the subfamilies Chrysopsinae and Pangoniinae that also includes a general introduction and characterization of the family.

These keys are to females only as male Tabaninae are not commonly encountered, except that males of Atylotus spp. are collected as often as females; although neither sex, of Atylotus spp., is commonly collected. Also, I have not seen males of several of the Tabaninae species. Males are keyed in Teskey (1990).

Distribution maps herein are based on the maps in Teskey (1990), with the addition of post-1990 records from the University of Guelph Insect Collection (Department of Environmental Biology; DEBU), and from the author’s personal collection (AWT).

When this project (Tabanidae of Canada, east of the Rocky Mountains) was started, Teskey’s (1990) ``The Horse Flies and Deer Flies of Canada and Alaska`` was out of print and not readily available. However after CJAI published Part 1 and after much of the current MS had been written, The Entomological Society of Canada made Teskey (1990) available online:

For the beginner, good quality specimens, complete with antennae and palpi, are needed for identification. Because of the inevitable variation within species a series of specimens, from the same locality and capture date, are more useful than a single specimen for correct identification.
The following brief comments are not meant as a criticism of Teskey (1990) but simply to document differences between this current project and Teskey (1990) and also to correct some of the errors/inconsistencies in Teskey (1990).

Teskey (1990) failed to comment on the strange distribution of Hybomitra frontalis (Walker) in Atlantic Canada.
Where found in Canada (transcontinental) it is usually abundant and a major pest. Thus its virtual absence from inland areas of Newfoundland & Labrador and the rest of Atlantic Canada is not readily accounted for. It is a common pestiferous species in the Atlantic salt-marshes of New Brunswick. The distribution of H. frontalis mirrors that of Chrysops furcatus Walker, a species with a continuous distribution from British Columbia to eastern Ontario, but absent further east until it becomes abundant on the same salt-marshes . McAlpine (1961) discounted the possibility that these Atlantic coast populations of Hybomitra (T. frontalis Walker, T. incisus Walker, T. septentrionalis Loew, T. labradorensis (Enderlain)) were anything other than morphs of the widely distributed inland species and suggested that they are all from a single interbreeding population. The large gap between the coastal population and the inland population negates any likelihood of interbreeding.

Hybomitra liorhina (Philip) can be exceedingly abundant on the Tantramar Marshes of extreme SE New Brunswick in early August as opposed to “apparently not very abundant at any locality, collections of only one or two specimens being the rule” (Teskey 1990, p. 213).

I am treating Hybomitra nuda (McDunnough) as a species and not as a subspecies of Hybomitra nitidifrons (Szilady); see Philip and Lane 1984.

Atylotus ohioensis (Hine) is confirmed as a Canadian species from specimens in the DEBU collection. Teskey predicted (p. 271) its occurrence in Ontario and Burger (1995) included southern Ontario in the distribution.

A specimen of Tabanus americanus Forster in the DEBU collection from eastern Ontario (Ottawa River) extends this species range in Canada from extreme SW Ontario.

Tabanus calens Linnaeus is now known from specimens in the DEBU collection from eastern Lake Superior; only in extreme SW Ontario in Teskey 1990.

Tabanus fairchildi Stone has been found to be widespread and relatively common is SW New Brunswick. Teskey recorded it from only 3 localities in Ontario and mentioned a single record from Quebec.

Tabanus limbatinevris Macquart is now known to occur further east than reported in Teskey, with 29 specimens in the DEBU collection vs. “known in Canada only from a few specimens … collected in Essex, Kent, and Lambton counties” (Teskey 1990, p. 316).

Tabanus nigripes Wiedemann is now known from as far west as north of eastern Lake Superior (DEBU collection). Previously only as far west as Georgian Bay.

A specimen of Tabanus subniger Coquillett in the DEBU collection from Oakville, Ont. (10 June 1978) adds to the single record in Teskey from 1932.

Tabanus sulcifrons Macquart is now known from a further 8 locations in SW Ontario other than those in the Niagara Peninsula reported in Teskey. Specimens in the DEBU collection from 12 locations.

Burger (1995) listed 5 species from North America including 3 species from Canada: americana Osten Sacken, rara Johnson, champlaini (Philip). The first two undoubtedly occur in Canada. The record for champlaini is based on 1 specimen, in the G.B. Fairchild collection, from Black Sturgeon Lake (BSL) Ontario (near and north of the northern border of Lake Superior). Teskey (1990) included champlaini as part of the Canadian fauna without further comment other than “This species has been rarely collected.” and “The only other collections are from Rhode Island and west-central Pennsylvania.” Burger & Pechuman (1986) commented on the BSL specimen and noted differences between it and the type material. It seems unlikely that the range of chamlpaini  would include the boreal forest of Canada and so this species is not included in the key.

A key, descriptions, and distribution maps for all 5 North American species can be found in Burger & Pechuman (1986).

These are the commonest Horse Flies in Canada being outnumbered further south by Tabanus spp. They range in length from 10-20 mm and have an eye pattern, in life, that usually involves 3 or 4 green transverse stripes on a dark background. All species are probably blood-feeders and are attracted to traps such as the Manitoba Fly Trap (see Pechuman 1981).

Four species (aequetincta, arpadi, lurida, sexfasciata) are Holarctic in distribution. A fifth species, H. nuda (McDunnough), is listed as a subspecies of the Palaearctic H. nitidifrons (Szilady) in Teskey (1990) and in Burger (1995). Philip and Lane (1984) questioned the validity of this placement and concluded there was insufficient evidence to reduce nuda to a subspecies of nitidifrons; I follow their opinion.

Characters that are commonly used in key couplets (subcallus, pruinose/denuded glossy; notopleural lobe, red/black; abdomen, warm-brown/grey-black) vary widely in minuscula, tetrica, frontalis and each of these species keys out in more than one couplet. Hybomitra frontalis is especially variable, (McAlpine (1961) described 8 colour morphs) and some of its many forms resemble pediontis and tetrica.

Flies belonging to one of the 22 species with a pruinose subcallus may be difficult to identify when excessively worn. In rare cases the subcallus may become bare and shiny, due to wear, which will lead to choosing the incorrect alternative in couplet 6.

Teskey (1990) listed 47 species of Hybomitra from Canada and Alaska; I treat the 40 species which occur east of the Rocky Mountains; 23 of these 40 species also occur in British Columbia.

Small to medium species, 8-15 mm in length, most similar to species of Tabanus. Head features are characteristic and include hairy eyes with either a single darker stripe or no stripe. Female frons either completely pruinose with no calli or with a small median and a small basal callus well separated from the eyes.

Of the 14 North American species, 13 are found in Canada with12 found east of the Rocky Mountains. Atylotus adults rarely, if ever, stray far from the larval habitat. Females of some species are known to be blood-feeders whereas females of other species are suspected of being non-blood feeders.

Teskey (1983, 1990) are the most useful publications for descriptions of the eastern species.

Large to small species, 8-27 mm in length, most similar to species of Hybomitra. Head features are characteristic and include the head vertex lacking an ocellar tubercle and eyes lacking hairs. A plain unmarked eye, no stripe or band, in some species (only for live flies) is a useful generic character; eye always striped or banded in Hybomitra spp.

Unlike in Hybomitra, a denuded subcallus is rare in eastern Canadian Tabanus spp. It is only consistently denuded in atratus and partially denuded in nigripes. In pumilus the normally pruinose subcallus frequently shows small to large denuded patches (due to wear?). For this reason I have included this species in two couplets.

Of the 30 species found in Canada 24 are found east of the Rocky Mountains. Most Tabanus species, 22, are found in Ontario with only 11 species occurring east of Ontario and 7 species west of Ontario and east of the Rockies. Teskey (1990) suggested that a further 2 species (sparus, superjumentarius) possibly occur in Ontario. Although still not recorded from Canada these two species are included in the key and images are shown and short descriptions given.

Two species, calens, pumilus, are sufficiently varied for each to key out in more than one couplet.

For a full diagnosis of the genus and detailed description of species, and for all genera and Canadian species in the Tabanidae see Teskey (1990).

There are a few errors and omissions in Teskey (1990). Perhaps the most significant is in the key on page 285 to separate the females of sulcifrons and limbatinevris; it should read:

Thomas, A. Tabanidae of Canada, east of the Rocky Mountains 2: a photographic key to the genera and species of Tabaninae (Diptera: Tabanidae) Canadian Journal of Arthropod Identification No.13, 16 February 2011, available online at doi: 10.3752/cjai.2011.13