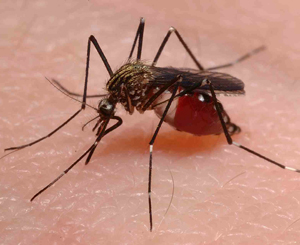 There are currently 82 species of mosquitoes (Diptera: Culicidae) in 10 genera known from Canada.  Dichotomous keys to the adult females are provided in two formats (HTML and PDF).  Photographs of diagnostic characters accompany the text descriptions in each couplet for ease in identification.  Included are: an introduction to mosquito identification, instructions for using this particular key, anatomical diagrams, and a glossary of terms.  Descriptions of recently introduced and potential species are also provided.

Mosquitoes are common insects throughout most of the world.  Their requirement for a blood meal for egg development makes them potential vectors of disease.  Whether  for research or control measures, the correct identification of adult female mosquitoes to species is essential.  For information on collection methods, general biology, and geographic distribution, refer to Wood et al. (1979).  There are many keys available to identify mosquitoes and this particular key is meant as a supplement to other publications.  This key contains digital photographs of taxonomically important characters to make correct identifications easier.

In order to use any key, it is necessary to have a good understanding of anatomical terms.  For less experienced identifiers, there are illustrations and a glossary included in this key which should be thoroughly studied before attempting mosquito identification.  Very simply, the body is divided into three segments: head, thorax, and abdomen.  The thorax supports one pair wings and three pairs of legs.  It is mainly the presence or absence of setae (long, hair-like structures) and the position and colour of scales (smaller, flatter structures) on the head, thorax, wings, legs, and abdomen that are used to identify adult female mosquitoes.  More detailed descriptions of structures are found in the anatomy section of this key as well as in other keys and entomological publications.  Keep in mind that different authors may use different terms for the same anatomical structures.

Identification keys generally use the most common characteristic among a specific group of specimens examined.  Therefore, when a large number of mosquitoes are identified, there will likely be some variation within species (e.g. differences in size, colour, morphology, etc.).  Possible reasons include temperature differences, environmental conditions, or geographical location, to name just a few.  If unsure of one’s identification, it is a good idea to double check identifications with other keys and/or more detailed descriptions of that particular species, especially if it is a rare or possibly newly introduced species.  Regardless of experience, when identifying mosquitoes, it is best to always start at the very beginning of the key, at the genus level, and follow each step until a correct identification is reached.  Assumptions based on general appearances often lead to identification errors.

Finally, we recommend that you maintain a reference collection of identified, pinned specimens for double-checking identifications.

How to Use This Key

This key works in the same fashion as other dichotomous identification keys.  The objective is to choose characteristics that best represent the mosquito in question.  There is usually more than one characteristic described in each couplet, with the first one mentioned being the most important feature to consider.  However, due to their extremely fragile nature, specimens are rarely in excellent condition, especially when caught in light or gravid traps which use a fan to capture specimens.  For more experienced identifiers, the decision may then sometimes be based on other characteristics.  If unsure, it is preferable to refer to the mosquito as an unknown or unidentifiable species.

Each step in the key will have one or two photographs to help you decide which characters most closely resemble the specimen in question.  Factors such as the age of the specimen and the type of photographic equipment used when taking the pictures contained in this key have influenced the degree of likeness to freshly trapped specimens.  In particular, some of the pictures cause the specimens to appear more red than they actually are.  Therefore, it is important to read the captions that accompany the photographs as well as studying the images, particularly with reference to scale colour.  Choose the option that best describes the mosquito in question and end at the correct identification which is written in red.  Please note that the species names within the image refer to the specimen in the picture and are not necessarily the correct identification.  Always begin at the genus level and continue until you reach a species name in red or can’t go any further due to the condition (e.g. missing characters) of the specimen.

Throughout the key there will be Notes to help you in your identifications.  There is an Appendix which includes more detailed descriptions of some species, a Glossary of terms, and a section on Recently Introduced Mosquitoes to Canada.  Something to note when identifying mosquitoes: sometimes loose scales can adhere to the mosquito, leading to incorrect identifications - be sure scales originating from the anatomical region being examined are not displaced from elsewhere.

We would like to thank the Ontario Ministry of Health and Long Term Care and Health Canada – First Nations and Inuit Health Branch for inviting us to participate in their West Nile virus mosquito surveillance programs.

For the collection and shipment of specimens to our laboratory for identification purposes, we would like to thank all of the public health units of Ontario and the First Nations and Inuit Health Branch communities that participated in the program. Also, for their mosquito submissions, we would like to thank Canadian Forces Base Borden and Point Pelee National Park.

We would also like to thank Gregory Ross at the Florida Medical Entomology Laboratory and Trudy  Stanfield for sending mosquitoes that were otherwise unavailable.

For her illustrations, we would like to acknowledge Kirsti Kivinen.

For their help in Dr. Hunter’s lab (the Fly Lab) at Brock University, we would also like to thank Michael Spironello, Trudy Stanfield, and Matt Patterson.

We would also like to thank Drs. Doug Currie and Chris Darling at the Royal Ontario Museum for the use of the camera that was used to take the photographs found in this key.  And finally, for their review of this work, we would like to thank Drs. Monty Wood, Roy Ellis, Jeffrey Skevington and Robb Bennett.